Samson Schiff: his work in Trieste

The period of Samson Schiff's work in Trieste, from 1851 to 1860, has been well documented, thanks to the work of Luisa Crusvar. This was a very active period in his working life as a silversmith, creating remarkable pieces of work for the synagogue, local catholic churches, and wealthy members of the public. All his work from this period is very typical for being a remarkable blend of very different styles, typical of the standards set by the Great Exhibition of 1851. The adjectives used to describe Samson Schiff's work include: hybrid, eclectic, neogothic, neorenaissance, neobaroque, neoclassical, rococo, medieval, arabesque and biedermeier. This is an overwhelming mixture of styles that once made Victorian taste unpopular, but much of the work that Samson Schiff produced does manage to have a coherence that demonstrates his good taste so that his work survives the test of time. The exuberance of the 1850s is tempered by his German origins, so that aesthetic attractiveness remains paramount.

The Jewish Museum in Trieste and the synagogue still own several items he made: the tas (breastplate), the ner tamid (eternal lamp which hangs before the Ark), two atarot (crowns which decorate the top of a sefer torah), and two pairs of rimonim (decorations that sit on the two handles of a sefer torah). The craftsmanship is excellent, and the designs attractive without being excessive. I was very proud to see these items in the past. 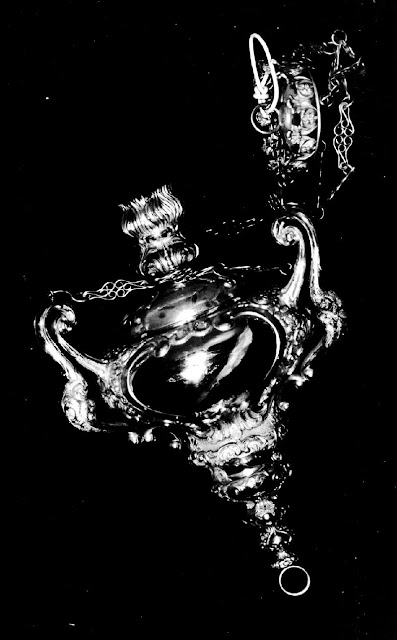 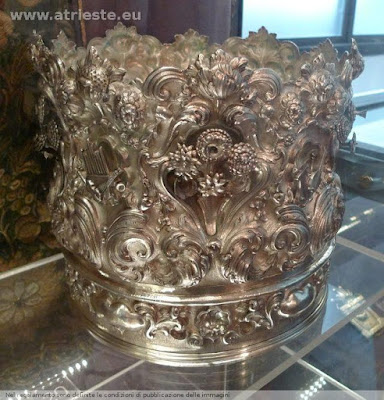 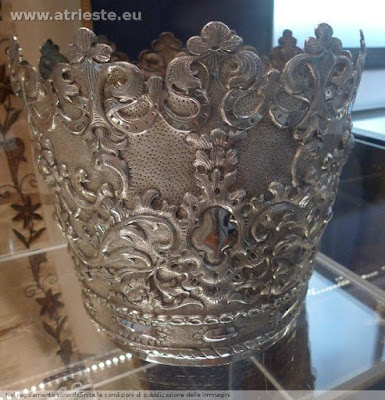 In 1852 he made four candlesticks for the church of Santa Maria Maggiore, the large Jesuit church that stands in a dominant position behind Piazza Unita'. I have not seen these candlesticks, which are described glowingly by Luisa Crusvar in her article, nor have I seen  the six candlesticks he made for the church of San Giacomo in Monte. The monstrance he made in 1858 for the church of the Madonna del Rosario is an impressive neogothic item with figures of the trinity. I have seen the dessert service that he made in 1854.I discovered it when I visited the Villa Sartorio in Trieste which had a table set for dinner as part of the display, and I followed a hunch, leaned over, and saw Samson Schiff's mark: a simple SCHIFF in a square punch. 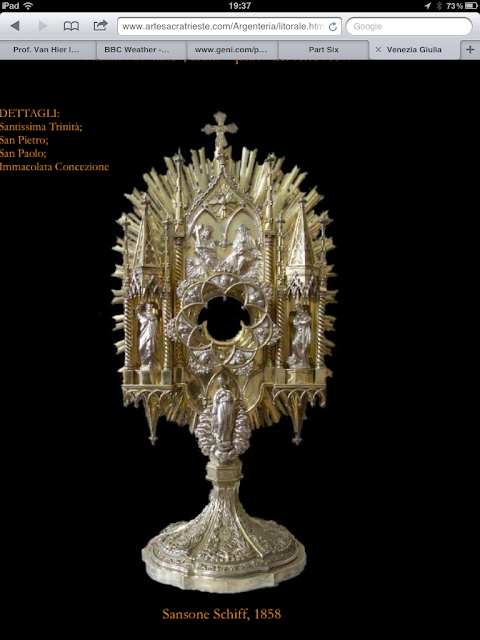 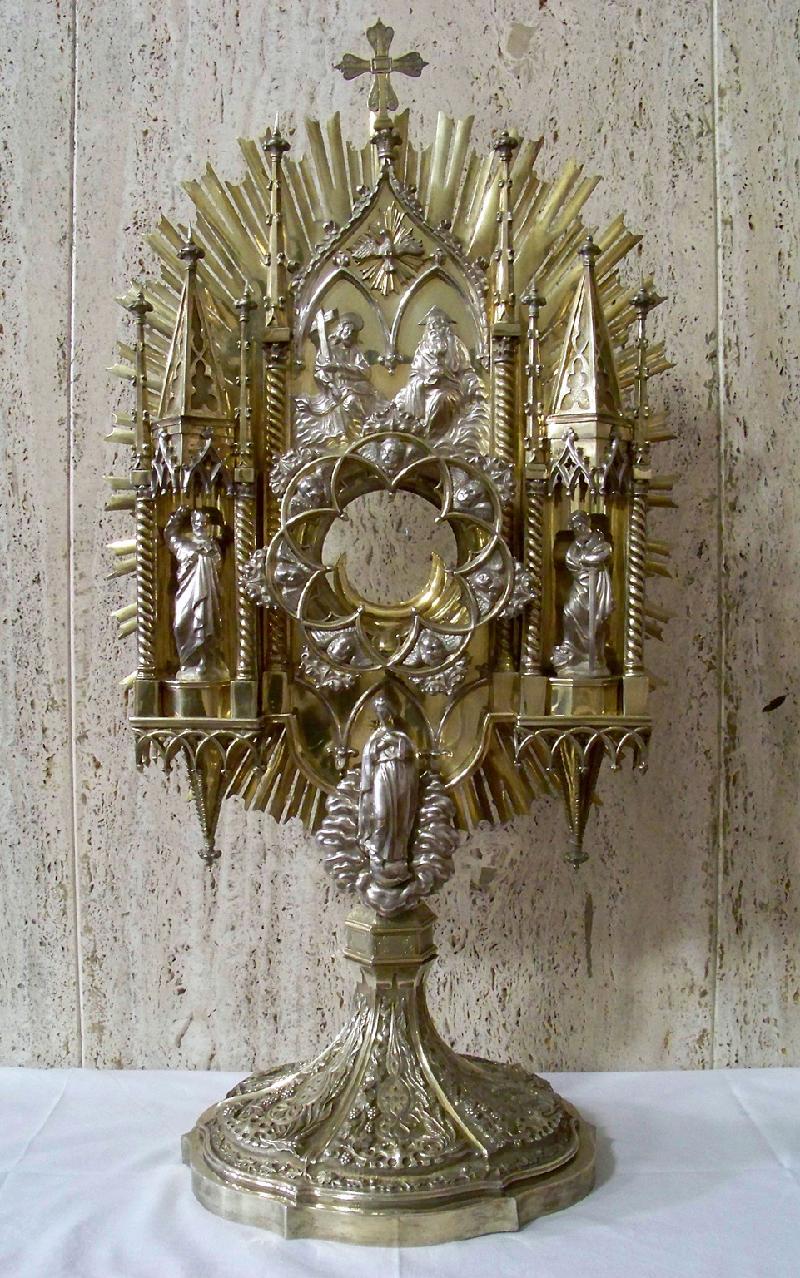 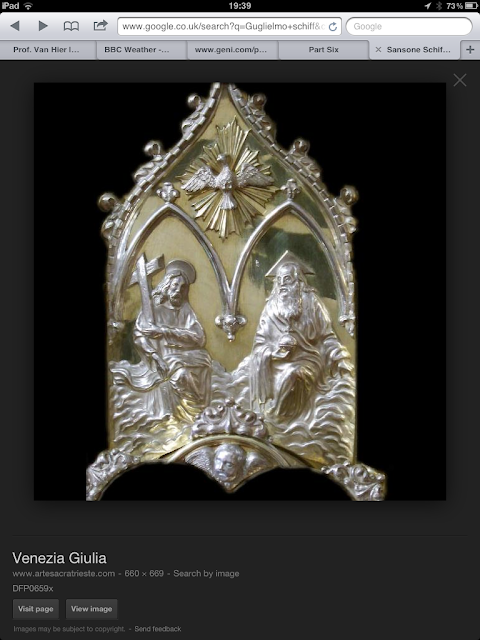 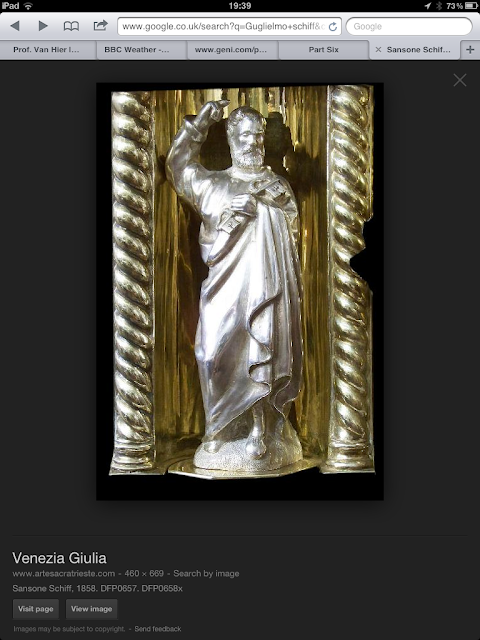 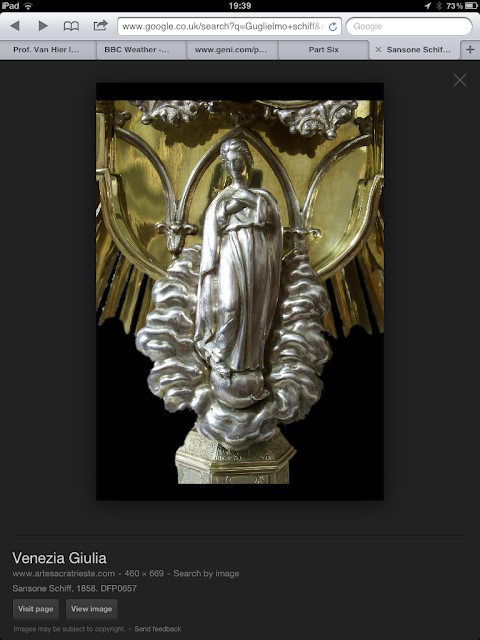 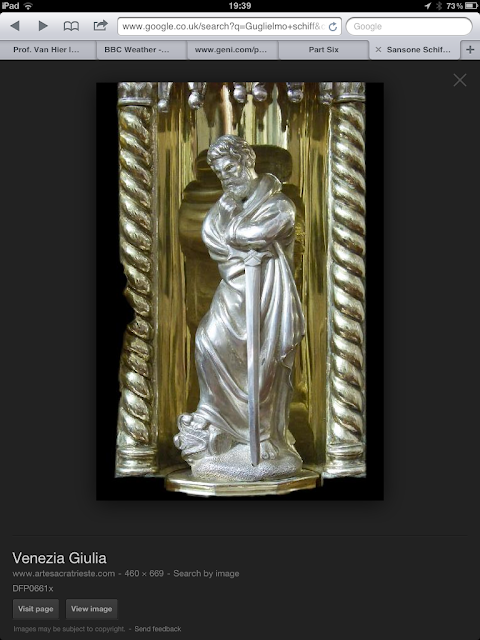 This same mark led me to purchase the only item in my family's possession made by Samson Schiff. A constant search on ebay eventually turned up a candlestick in Los Angeles, which I purchased even thoughI thought it was overpriced. It reached me eventually in England, fortunately without import duties, and I unwrapped it to discover a peculiar hybrid: a gothic candlestick marked with Samson Schiff's name,topped with a quite inappropriate candelabrum in classical style, and so heavy that it had damaged the candlestick that formed its base in a strange marriage. 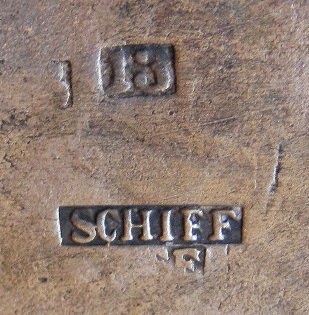 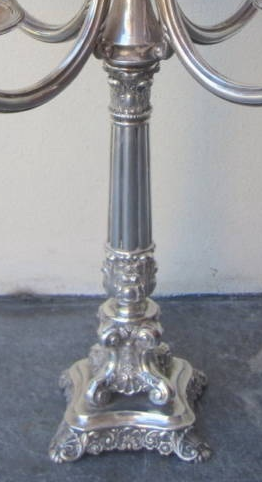 I had the candlestick repaired by a local craftsman silversmith in Exeter, and its missing drip tray at the top I supplied from a vaguely suitable silver-plated version that I had. The candelabrum now sits atop  a fine classical column in just the right style, no longer joined in an inappropriate marriage, and Samson's candlestick is a constant source of pride to me. I am happy that something he made has come back to his descendant.