The youngest daughter of Alfred Schiff was born in 1877. She was presumably named Johanna after her paternal grandmother Johanna Wollheim. I have found nothing about her early life, but in July 1897 she married Hermann Richard Wächter of Hamburg in a suspiciously quiet ceremony at St George's, Hanover Square. There was a son born to this marriage, George Ernest Richard Harry Wächter; presumably George after his paternal grandfather, Ernest after his maternal great uncle and uncle, and Richard after his father. The marriage appears to have been short lived, and ended at some time in divorce, as by 1905 in her father Alfred Schiff's will, Marie is described as being the wife of Friedrich - or Fritz - von der Marwitz, and her first husband is obviously seriously out of favour, so much so that if young George Wächter were to live with his father then he would not receive any inheritance from his grandfather. I do not know what became of George's father, though he may possibly be the German soldier Hermann Wächter who died during the First World War on 18th December, 1914, on active service in the German army. As for George, he appears not to have married and died on 19th July, 1945 at Beaulieu-sur-Mer in the south of France, between Nice and Monaco.
[Postscript September 2018: George it seems did indeed marry, to the Brazilian Plàcida Martins. Soon after George's death she married Alvaro Lyra Da Silva of Rio de Janeiro by whom she had a daughter.] 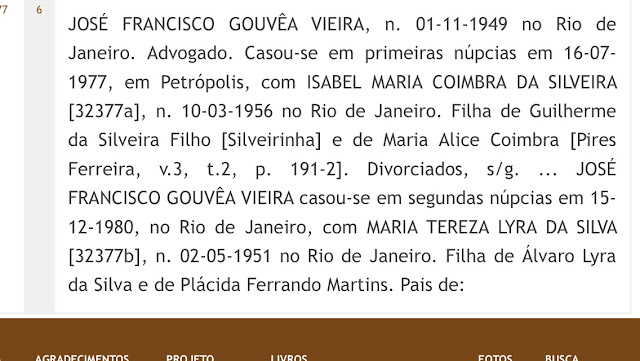 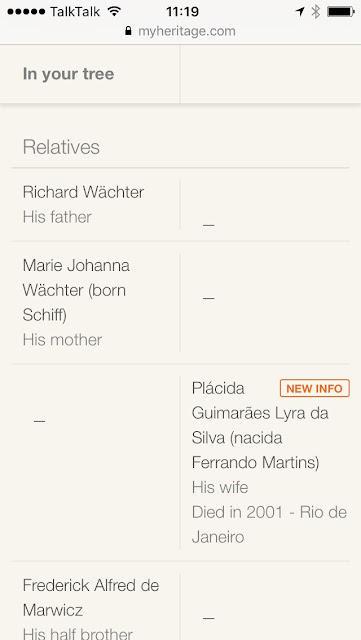 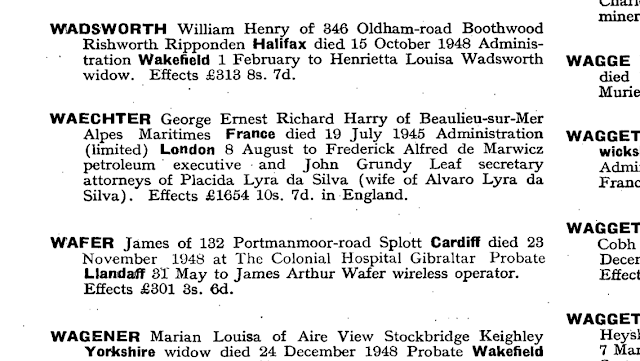 Marie appears to have married Baron Friedrich Wilhelm Edmund von der Marwitz, a member of a well known and distinguished German noble and military family from Prussia, at some date prior to 1906. Their son, and probably only child, was Friedrich Alfred von der Marwitz, born at Frankfurt am Main, on 11th November, 1907. His names were presumably after his father, and maternal grandfather. Marie and her husband, the baron and baroness, appear to have settled at some time in England, where Marie eventually after the First World War reclaimed her British nationality and her husband was naturalised. Their surname was transformed to de Marwicz, giving it a Franco-Polish flavour, and indeed they seem to have lived a great deal in France, in Paris and Monte Carlo. Friedrich - now Frederick - wrote books in the 1920s heavily critical of Germany's role in the Great War. He died in Monte Carlo on 16th April, 1944, before the Second World War ended, and just over a year before the death of his stepson. Marie Johanna did not long outlive him: she died in England on 25th February 1948.
[Postscript January, 2017: Marie divorced her husband and reclaimed her British nationality in order to receive her generous inheritance from her uncle Sir Ernest Schiff. She then promptly remarried her ex-husband.]

Frederick Alfred de Marwicz appears to have been educated in England, was also naturalised as British, and attended Pembroke College, Cambridge. He is known as an ice hockey player, also known as Frank or Bibo, and played for Great Britain as a left wing from 1930 to 1934. He served in the Second World War in the Scots Guards, rising to the rank of Captain. He was the third husband of Diana, born Frances Walkington, daughter of Thomas Walkington and Edith Mary Faulkner. She was born in Yorkshire in 1913. Her first husband was the Scot Anthony Gilbert Thorburn in 1935. In 1941 she married David Behar, whose name suggests he was a member of a Sephardi family, and in 1951 she married Frederick de Marwicz. Two daughters were born, Marie in 1952, who I believe lives in west London, and Diana in 1953, who I believe lives in Torbay. Frederick died in 1990.

A Miscarriage of Justice?


A week ago I was in Cornwall. On the Sunday afternoon we went to Lelant churchyard, close to St Ives, and searched for the grave of Ernest Wilton Schiff, but failed. We did enjoy eating our lunch on a bench in the churchyard, and the wonderful view across to the sea.


The next day we came back, and this time I found the grave within a couple of minutes. I don't think any member of the family has visited the grave since he was buried here ninety-six years ago, and I did recite kaddish for him and place a stone.


Ernest was only forty-eight years ago when he died from the injuries he received from Albert John Nicholls, the Cornish miner who attacked him brutally accusing him of attempting to seduce his daughter. I have written about the coroner's enquiry and the trial already, but this visit prompted me to enquiry further. What I discovered was startling, and I feel that his death was undeserved and his attacker's acquittal unjust, unfair and inappropriate. It is difficult to write about the case in full detail as there are living descendants to both parties involved in the fight, but Ernest Wilton Schiff, for all his many faults, was definitely not the rogue he was painted by the gutter press of the time, whose outrageous statements have been repeated in recent publications.


Albert John Nicholls seems to have had a troubled life. When he was eleven he is described as 'adopted'. He did have a  criminal record, being fined for swearing, for example, in July 1900 and March 1907. He married his wife Bessie Chappell in the autumn of 1901. I presume he was Nora Kathleen's father, but it has proved impossible to even find her birth certificate. She is not mentioned of course in the 1901 census. In 1911 she is described as living with her mother's aunts and aged nine. Nora's subsequent story is hardly uplifting. She left Cornwall and took up with a much older man who already had a family of six children, being married to a Beatrice from Sancreed, and had six children by him, marrying him after two children had already been born. Their relationship was stormy and even was reported in the newspapers in 1933. Nora herself served a six months' sentence for running a brothel. One of her sons has bravely described her as 'exceedingly promiscuous'. After her husband's death in 1955 she subsequently remarried in 1956 to a Reginald Parsons, but in fact she too died relatively young, in June, 1962. Her death certificate states she was aged 59. Her own father did not long outlive his victim, dying in 1926 at the age of forty seven.

As for Albert Nicholls and his brutal attack on Ernest Wilton Schiff, there are some unexplained problems with the case. The letter that was supposed to be the evidence of his daughter being enticed to become a London prostitute was never produced. The claim that Ernest Schiff's massive injuries were the result of a fall was never challenged, though it seems that Albert Nicholls kicked him repeatedly while he lay on the ground.


Strangely Nora and Ernest did share something. They were both very promiscuous, though he was largely protected by his class and wealth, except in Cornwall, where his London ways and German surname counted against him. In Cornwall he was grieving with the recent death of his only son in the Great War, and coming to terms with his recent divorce. He was in fact living with his mistress Selina Moxon, and it seems unlikely that he was able to seduce her, given her presence, and the smallness of the Tinners' Arms at Zennor, where they got to know each other over a period of several months in 1918 and 1919. Both his descendants and Nora's have had to carry the burden of this unhappy episode, though in different ways.
Posted by Frank Gent at 07:36 No comments: