I was intending to write about Samson's family and descendants, in particular his sons, the half brothers Wilhelm and Friedrich, and his daughter Paolina, but it seems sensible here  to start to explore the life of Samson's older brother Leopold. Six months ago I knew nothing about Leopold, now I have a vast quantity of information about this branch of the family.

As an introduction I should share some information about Napoleon, and how, directly or indirectly, he affected my ancestors. As Jews in eighteenth century Europe they were denied many rights. Jews were usually allowed to live in a town on sufferance, and they were barred access to education and the professions. My English education tried to teach me that Napoleon was bad, a power-crazed megalomaniac. Probably sex-crazed too. From my mother I received a different portrait. It was Napoleon who brought liberation and freedom to the peoples of much of western Europe, introducing the concepts of the Declaration of the Rights of Man, and especially his hugely influential Napoleonic Code. In particular, Napoleon is remembered for his emancipation of the Jews of Europe, giving them the same rights as all other citizens. He acted similarly in the case of homosexuality: by omitting all mention of it from the Napoleonic code, so that it was henceforth decriminalised. Although Napoleon was defeated personally at Waterloo, his ideas lived on, as was reflected in the year of revolutions in many places in Europe in 1848, and leading ultimately to the unification of Italy and similarly of Germany.

Leopold Schiff was born on 1st September, 1797 in Mannheim, to Samuel Schiff and Augusta Fuld. It was ten years before his brother Samson was born, and we have no clues at present as to who else belonged to this family. [No longer correct. Please see more recent blogs.]

Leopold was born at a time of great political change. In 1792 the area to the west of Mannheim was ceded to France. From 1806 to 1813 the Confederation of the Rhine was formed, under Napoleonic control, and with emancipation of Jews and the Napoleonic Code. However, soon after the ending of the rule of Napoleon, the Grand Duchy of Baden, in which Mannheim lay, was afflicted like the rest of Europe by the climate crisis of 1816-17 which led to much deprivation and suffering. In addition, with the restoration of absolutist monarchs throughout Europe, the equal rights given to Jews were withdrawn.
In 1817 Leopold Schiff would be twenty years old. I can imagine that he would be attracted by a move to Trieste, where equality for all members of the population was guaranteed by the Austrian regime, uniquely within the empire. A likely scenario is that he removed to Trieste to make his fortune, and was employed by the local Jewish businessman Jacob Wollheim, proved himself and married his employer's daughter, a common pattern throughout the past.
The Wollheims came from Lissa, part of Prussia from 1793,  but now in Poland. Jacob Wollheim ran an import-export business, and also the 'Intrepida Compagnia di Assicurazioni', founded in 1832 and which continued till 1884. Wollheim & Co were very active in the import and export of goods, and we are fortunate that in Trieste the details of all businesses were published itemising which ships they were using, which goods they were carrying, and what the quantities were. The trade passing through Trieste was extensive, but  in the first six months of 1840 for example, Wollheim & Co dealt very much in cotton goods from Liverpool, and from Alexandria they imported large quantities of beans, huge quantities of grain from Odessa, and items such as almonds, natron, Russian iron, books and prints, wine and what I think was a loading crane. Leopold Schiff's world view must have been vastly enlarged by his experiences in Trieste, a major cosmopolitan seaport, where many languages were spoken and many cultures and religions met.
Leopold married Johanna Wollheim on 2nd November 1832 when he was 35 and she was ourteen years younger. Their portrait was painted by the important local artist Giuseppe Tominz, portraits that were to hang in their son's home in London. There present whereabouts is unknown, but photographs of the portraits survive in the Witt Library at the Courtauld Institute of Art in London. 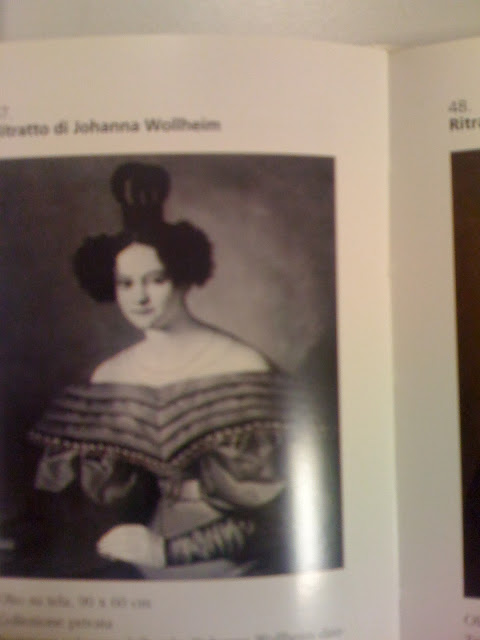 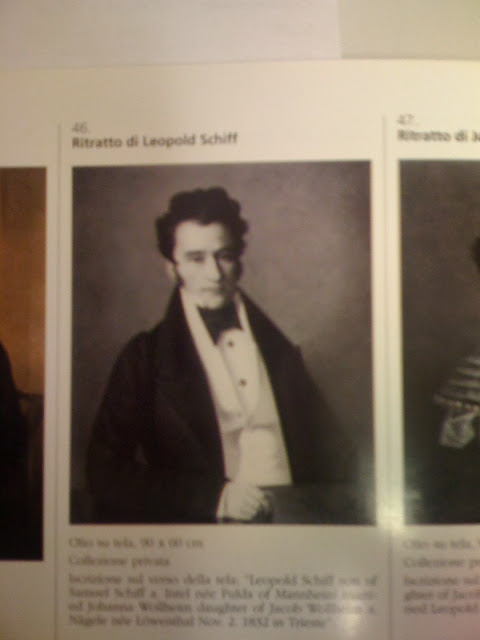 Leopold and Johanna appear to have spent the early years of their married life in Alexandria, where there first child Emma Alessandra (named in honour of her birthplace) was born  14th October 1834. Giustina was born , as were the rest of the couple's nine children 1837. Samuele followed in 1838, Arie Natan in 1839, Salomon in 1840, Virginia in 1842, Jenny in 1844, Ottavia in 1845 and Eliezer Hassi was a late arrival in 1849. Their stories are remarkable: they  spread throughout the world, to Hamburg, Berlin, Cincinnati, London and Vienna. Their stories were remarkable and well worth the recounting. Their achievements were memorable and in many different ways. As they moved across continents their names were transformed into their German or English versions.

I bought a letter on Ebay which puzzled me for a long while, as it was sent to Alexandria in Egypt from Trieste and is signed 'Schiff'.It was only this year when all these cousins appeared from the shadows of the past that it began to make sense. 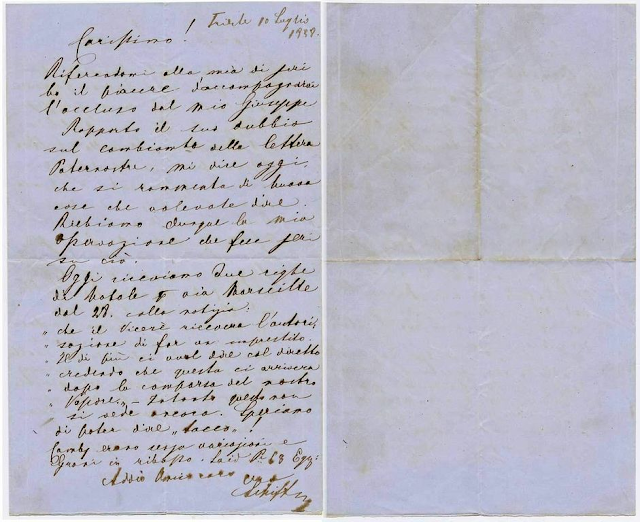 By this time Leopold, for I feel pretty certain it is he wrote this letter, was back in Trieste. There is an unexpected gap, for a fecund couple, of three years between the birth of Emma in 1834  Alexandria and Giustina in 1837 in Trieste. Interestingly this letter is written in very good Italian, and in formal Italian too, though the spoken language of Trieste was in fact the Triestine dialect. The letter deals with business matters: finances, loans to the viceroy, presumably of Egypt, shipping and prices for commodities such as grain.
Leopold continued to flourish in business. In 1838 he entered as a partner in his father-in-law's business. In addition he himself owned an ironworks in Styria and coal mines in Croatia.

Over the next eighty years Leopold's children spread out, made fortunes, married, and also kept in touch. The evidence is very strong that they did indeed keep in touch, supporting each other, and talking to each other in Triestine Italian when they met, even though they were also fluent in German, the mother tongue of their parents and of their education in Trieste, and also English and French. They were a remarkable family.

The firstborn, Emma Alessandra, born 14th October 1834 in Alexandria in Egypt, married Dr Jacob Lazarus a lawyer in Hamburg in 1859. He was fifteen years older than his bride and had behind him a successful career. He had received a doctorate in Law in 1842 from the university of Heidelberg but was unable to receive citizenship in Hamburg because of his Jewish faith.He was, however, a member of the constituent assembly that was formed in 1848 as part of the Year of Revolutions in Europe.and volunteered in the war with Denmark in 1849 in which he was captured. From 1875 until his death in 1881 Jacob Lazarus was a member of the Hamburg parliament. He and his wife had no children. Ten years earlier, Henriette and Jacob welcomed to their home her father Leopold Schiff and her unmarried sisters Viginia and Jenny. Her father Leopold must have died in Hamburg in about 1874. We do not know when Leopold's wife had died.
Emma, who was known as Henriette, became well known in her own right as the cultured hostess of a musical salon in Hamburg, from her home on the Esplanade, and in particular is remembered for her support of and friendship with the composer Gustav Mahler.

On Christmas day 1892  Mahler wrote to his sister Justine 'Today I am invited to a very fine dinner'. In early January he told her I spent Christmas Eve at the house of the widow of a Dr Lazarus, an elderly woman with two equally elderly and unmarried sisters - their brother is Dr Schiff from Vienna (probably in fact known by Sax).It was very quiet and so I fared very well. - On New Year's Eve I was invited to a large party, also on the spur of the moment.'It seems obvious that Mahler got on extremely well with the Schiff sisters, for in early April 1893 he wasplanning to share his holidays with them:

Dearest!
I've just come from Frau Dr Lazarus and her sisters. We are all agreed to spend the summer in the same place, if it's possible. So please look around where you are renting for me to see if there isn't also a nice four-room (or so) apartment to be had for three ladies - and tell me about it in detail. Arrange the business so that possibly everything for Frau Lazarus can be arranged by writing. To me it would seem very agreeable: the three would be very well suited to us, and it also would be of the highest importance for you as a starting point for Hamburg. Please, all of you make an effort towards this end!
See to it that the location is absolutely beautiful and mountainous - and above all that there's water! (for swimming!)
Best
Gustav

Dearest Justi!
...The house of which she spoke - that of Dr Lazarus's widow, Frau Lazarus and her unmarried sisters, all three between 40 and 50 years old - is the one here that I visit most often (especially recently - they are very cultured and kind ladies, who lead a kind of bachelor's life and have become very good friends of mine. If you visit, I would introduce you there above all.

These must have been happy times for the three sisters, mothering this young man. Although he describes all three as elderly, Jenny was only eleven years older than himself, Henriette was 59 years old. Their calm friendship was appreciated, and he relished their gracious company. At this time Mahler was still nominally Jewish, his conversion 1897 was the price he paid for promotion in Vienna. As an assimilated Jew he enjoyed spending Christmas with the three Jewish sisters from Trieste.