The Marriage of Esmé Borlase Schiff

The tension between the two branches of the Schiff family, the Lowndes Squares and the Brook Streets, is well known and still remembered. It reflects the very real differences in personality and lifestyle between the brothers Charles and Alfred Schiff, and their descendants, and the hurt that was caused by Sidney Schiff's books. This is reflected also in the account entitled 'The Family Gathering' that was written by Esmé Schiff, Alfred's granddaughter. 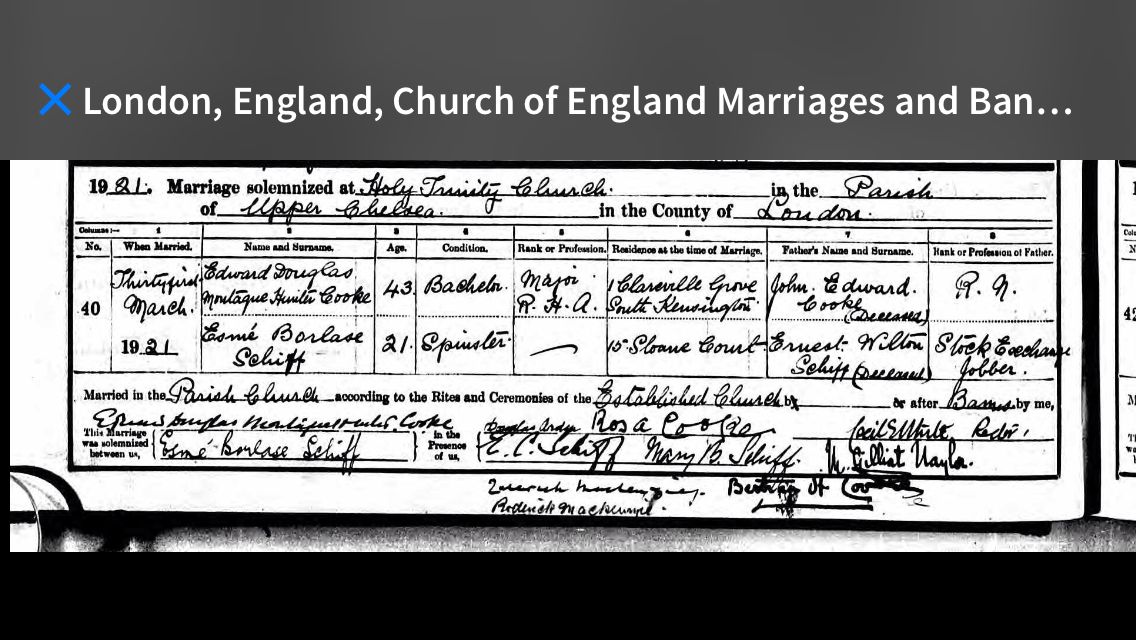 Yesterday I obtained a copy of Esmé Schiff's marriage certificate, which is worthy of close scrutiny, as it indicates that the two branches of the family were still 'friends', so to speak, though 'The Family Gathering' was probably written four years after Esmé's wedding. It is the names of the witnesses to Esmé's wedding that are interesting.
Firstly is Douglas Arden, who may possibly be identified as the Douglas Arden (1844–1930) who inherited East Burnham House in Buckinghamshire.

I cannot so far discover the reason for any connection to Douglas Arden, though it seems likely he was godfather or best man to the groom.

The second witness was Rosa Cooke, the bridegroom's elderly mother. Born in 1852, as Sarah Rosa Mackenzie, she died just six months after the wedding.

The next two witness were E. C. Schiff and Mary B. Schiff, the first being the widow of Alfred's son Ernest Wilton Schiff. She was born Emma Clementine Borlase in New Zealand. Mary Birch Schiff was the widow of Charles Schiff. We know that Emma Schiff remained close to the 'Lowndes Squares', being in sympathy with their lifestyle and mores. One member of the Lowndes Squares wrote in 2004 about Emma that "She married young to a Col. Cooke, to get away from her impossible mother, who was cold, selfish, and lesbian: for years she had a 'companion' called Mollie Naylor, who was equally unpleasant." The penny has just dropped for me that this Mollie was no other than Mary Gilliat Naylor, the fifth witness on the certificate, about whom there is considerable information below. Emma was born in 1871 and Mary in 1889. Emma died in 1959 and Mary in 1962.

The next witness is indeed interesting; she is Mary Gilliat Naylor, an American who was naturalised as British on 13th July 1925 and whose address was given as being 15, Sloane Court. This was also Emma and her daughter Esmé's address at the time of her marriage.

Engaged to the wealthy Louis Ream, she was jilted by him, and did not subsequently marry.

BiographyBirthdate and birthplace from her father's passport application.She lived in Germany from her birth until July 1889.[1] She lived in France, Switzerland, Germany from July 1889 to 1897, at which point she returned to the USA.[1] She lived in Germany 1904 to 1906.[1]On 14 Apr 1910, The New York Times published a notice of her engagement to Louis Marshall Ream, the playboy son of Norman B. Ream one of the 25 richest men in the USA.[2] The Chicago Tribune followed with a similar announcement 10 days later. [3] The marriage didn't take place, and Louis eloped with actress Eleanor Pendleton the following year.She lived in England from 1912, with one trip to visit the USA in 1915.[1]In 1924, she wrote in her passport application, "I was born in Germany, where my father was American Vice-Consul. Later I attended school in Switzerland, Italy and Germany. Since 1912, I have been residing in England with my guardian, who is a British subject."[4]On 13 Jul 1925 she swore an Oath of Allegiance to Great Britain and was naturalized as a British citizen.[5]She was "a spinster" when she died 14 Dec 1962 at Barnwood House Hospital in Barnwood, Gloucester, England.[6][7]

Mollie Naylor was obviously active during the Second World War in Lymington, for which you received the British Empire Medal in 1946.

A hundred years later the relationship between Emma and Mollie can be seen in a more kindly light. Emma had a difficult relationship with her husband, a notorious philanderer and bankrupt, from whom she was divorced not long before his brutal death in 1919. Mollie, although of good family, was not only jilted by her fiancé, she was also trapped by the colossal shortage of men following the heavy losses of men's lives in the First World War. That they found friendship and companionship is to be lauded. Esmé's marriage to her much older husband was no doubt the consequence of her considerable fortune. It was not the most successful of marriages, and Monty and Esmé lived mostly apart as their three daughters grew up.

The sixth witness is a Mackenzie, presumably a maternal cousin or uncle of the groom, but I cannot distinguish the forename. Is it Frederick? 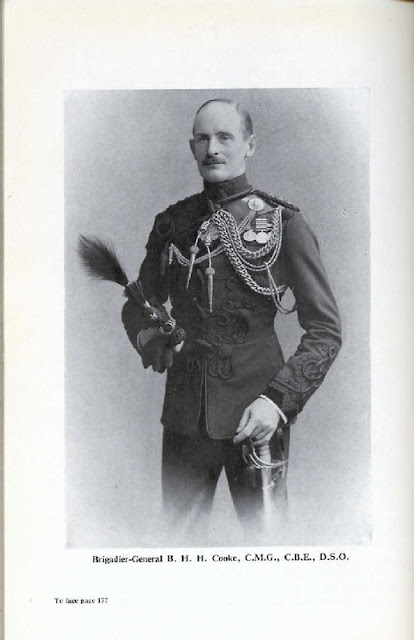 The seventh witness is Bertram H. Cooke, who I believe to be Major Bertram H. H. Cooke, the bridegroom's brother.

Finally, there is Roderick Mackenzie. Presumably he was another cousin but so far I have not been able to identify him more accurately.