Richard, Myrtle and I: a Novel by Sydney Schiff

Richard, Myrtle and I

This is a late work by Sydney Schiff, writing as Stephen Hudson. Like much of his work it is autobiographical. It appeared in 1926, a year after his book ‘Myrtle’.
It is a strange book, which I found confusing and difficult to follow. I would guess, as he himself hints, that he had been reading Freud, and was familiar now with the concepts of id, ego and superego, and in consequence the ‘hero’ of the novel, Richard, appears as two personae. This is never made clear, so that the ‘I’ of the title is a strange concept: an almost invisible éminence grise or bad angel, who makes comments and appears and vanishes. The book was not included in the omnibus version of the Richard Kurt series, neither was ‘Tony’, which also forsook a narrative style in the third person, and adopted the first person, which became impossible to sustain successfully with the death of the narrator.
There are, however, several passages in the book that are of interest for the insights they give to Sydney Schiff’s life and character. 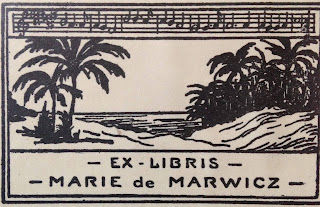 The copy in my possession formerly belonged to Sydney Schiff’s younger sister, Baroness Marie de Marwicz, and bears her bookplate. She must have been very familiar with her brother’s life in all its details, and I wonder if she read the book and what she made of it.
There is an interesting glimpse of the Schiff family at the very beginning of the book, on page 8.
“I knew all the members of the Kurt family, who, with the exception of Richard’s brother, Anthony, all avoided me. This did not prevent my having a certain respect for Richard’s mother and for his uncle Frederick. These two had strength of will and unflinching courage, qualities that appeal to me even if misdirected. When Mrs. Kurt died I was still young but I remember words of hers which showed that she felt the growth of a spirit in me that must in the end assert itself. In Frederick Kurt I recognised one from whom I must conceal my strength, for he, unlike Richard, would have crushed it before it had time to develop. Anthony was another matter. It amused him and suited his temperament to encourage my emergence and to provoke my outbursts. He had not the kind of intelligence to grasp my character, still less to anticipate the results of my conflicts with his brother. It sufficed him, if for the time being, Richard was placed in an uncomfortable or false position by my attitude and behaviour, the significance of which he desired as little to understand as I to explain it.”
Richard is Sydney Schiff, Frederick is his uncle Ernest Schiff, and Anthony is his brother Ernest Wilton Schiff.

On page 22 is a quite harsh description of the relation ship between Sydney Schiff and his wife Marion Fulton Canine.
“Richard had been married to his first wife Elinor for over twelve years before i caught my first glimpse of her. That glimpse was enough. If his character is an open book to me, Elinor’s was a sheet of glass. Only Richard could have got entangled with so obvious, so uninteresting a personality, only Richard could have endured the society of an acrid and detestable human clothes-horse for nearly twenty years…” He follows this with an example of her behaviour.

On page 46 is an account of the death of his wife, Violet Schiff’s, sister in Paris, leaving twin boys. One was to die in the Great War, the other was to become Sir Edward Beddington-Behrens.

Page 5a has a reference to Schiff’s villa on Lake Como. On page 76 is an interesting family reference:
“My uncle wants us to join him in Hamburg. My two old aunts are keen on seeing Myrtle.” Sydney Schiff’s uncle, Sir Ernest Schiff, had in fact originally three aunts in Hamburg. The eldest Emma was married to a Dr Lazarus, and she was joined by her unmarried sisters from Trieste, Jenny and Virginia.

There is a curious and atmospheric passage about the Schiff family on page 78:
“I am in a large square room that seems in a manner familiar to me. With their backs to me, Richard, Myrtle and three other figures are gazing at two pictures, masterly and vital portraits of a middle-aged man and a middle-aged woman, amazingly strong and resilient personalities, dressed in the fashion of the end of the eighteenth century. Off the three figures, one, a man of short square build, is muttering. he doesn’t turn. He is absorbed in the portraits.
“Thou Nathaniel! Thou Johanna! Look down upon us. Theophilus, William, married among strangers. Now they are gone. Both begat sons but the old stock is dying out, dying out. They cannot make, they cannot hold. Richard, weaker son of a weak father, has no issue; Anthony, a wastrel, what can his boy become? Theo’s two boys are not of us. Their mother’s God is not our God, her people are not our people. We are dying out.’
It was Frederick Kurt who turned and, without speaking, looking downwards, walked slowly across the room. I caught his grim, firm profile, the thin shaven lips, the ‘trifle of whisker,’ the air of ‘self-confidence and self-esteem,’ and, over all, the shadow of the past, the shadow of death…”
Nathaniel was Leopold Schiff, husband of Johanna Wollheim. Theophilus is their elder son Charles, William is Alfred, Richard is his son Sydney, and Anthony his younger son. Frederick of course is Sir Ernest Schiff. Anthony had one son who died in the great war. Charles had two sons, one of whom died also in the Great War, and the other adopted his mother’s surname of Burch.

Quite different to these references to family is the description on page 116 of Richard’s, or in other words Sydney Schiff’s, interest and involvement in modern art.
“Richard’s excursions into the field of plastic and pictorial Art began to assume significance for me after we paid a visit to each in turn of the two young artists whose acquaintance we made on the occasion the sculptor’s expulsion provided the evening’s entertainment. They had been students of the same Art school and had doubtless been united during that period of adolescence by a common hatred of their colleagues. But it was soon apparent that the diversity of their proletarian origins, the one was a Galician Jew, the other a Connemara Kelt, made the pair of aliens temperamentally incompatible. The young Jew’s favourite model was his mother, the young irishman’s his mistress…”
Is this Mark Gertler? Or Jacob Epstein?

Proust appears on page 211. Sydney Schiff was an early advocate of Proust, and became his friend. Schiff adored proust, seeing him as the personification of what he himself would have liked to have been, even recognising Proust’s character Baron Charles as himself, in some ways.
“ ‘…I can’t even get him to read Proust.’
‘Who is Proust?’ I asked.
‘Proust is my newest and best friend, the only friend the war has brought me.’”
Later on page 217 he comments:
“…It was difficult to believe that any pure-bred Frenchman could have evolved a style so exotic and anti classical, still more that he would have selected a typical cosmopolitan jew as one of the principal personages of a novel in which all the social values of pre-war France are reviewed and assessed. These peculiarities struck me as extremely significant, the more so because they coincided with my own theory of the social and intellectual influences at work in modern Europe.”
Of course, both Proust and Schiff had a Jewish parent. Proust inspired Schiff’s writing and affected the way he wrote.

The book ends with a postscript, ‘A Note on Stephen Hudson’, by Denis Saurat.
“After receiving a doctorate of the University of Bordeaux, and a lauréat des concours d'agrégation in 1919, he became associated with the Department of French at King's College London from 1920, where he was a professor from 1926. He was also director for many years of the French Institute of London (Institut Français) in South Kensington.” [Wikipedia]


This short essay stresses the importance of a female muse for a writer, and also the Freudian concepts of the ego and the superego ‘in the psychology of the artist himself.’
Posted by Frank Gent at 07:52